So me and my mate Mike have decided to run the Lisbon Rock n Roll Marathon in October for no other reason than if we don’t do it now, it is going to get very much harder!

We are not doing it for a charity or a cause, this is a very selfish act. But actually the most selfish act seems to be the training.

Originally I was most worried about the effect that the training and the race would have on my already fairly knackered body. Even 15 years ago I was called Robocop because of the amout of strapping I had to wear to play football! And at the Tennis club the initial reaction was “do you think it is wise for a person, who has to strap up both knees just to play a game of tennis, to do the marathon? Well wisdom was never my strong point.

But now, only 2 weeks into my training regime I am starting to realise that the greatest effect is the day. How do I fit in all this training… and it is fine now but sooner or later I will be going out for 3 hour runs – and that doesn’t include the recovery! 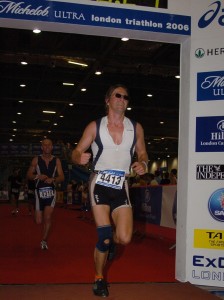 When I did the London Triathlon I could build the training into the day (well, truth be told, I didn’t really train for running I just trained for cycling and swimming and hoped my general fitness would get me over the last 10km). Train for the marathon is a lot harder!

Well I have signed up now and I have realised that there is nothing for it but to get up earlier: it’s lucky I have the kids to give me that extra push in the morning!