I have a race and a training plan. Now are there any decisions about kit that I need to make?

I can’t exactly remember what the deal was at the London triathlon, whether you had to chose between hiring or buying or whether you could hire and decide to buy later, but whatever it was I ended up with an Orca wetsuit making me  sound like a killer whale – which I thought was rather cool!

I will just wear a plain swim hat. I am not into competing on the “cool clothing” front, on the basis that I will lose! I will get a wave hat on the day, so it is just one to hear underneath and to help secure my goggles. I will wear which ever I find first on the morning (I will take two just in case I lose or break one)

I will splash out on some decent goggles because they can really make or break a long distance swim. I currently have a pair of Zoggs Phantom Elites to go swimming with my daughters which I love and are comfy but I will try out a few others before the day.

I have just bought a pair of Aqua Sphere Kaiman goggles which arrived today with a packet of haribos. I have eaten the haribos and I will use the googles later. 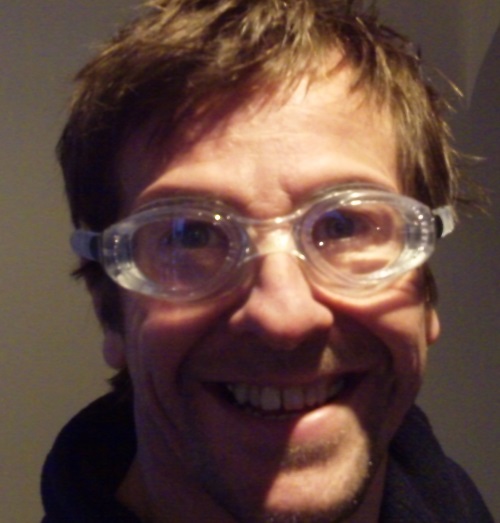 When I did the London Triathlon I borrowed my brother-in-laws Giant which was slightly too small for me (ha ha ha) but a million times better than the Raleigh Stonefly I had trained on.

After London I decided to get a proper road bike as I quite liked the idea of continuing with triathlon.

At the time I was one of the Upper Management Reggies so I told my company to join up to the government’s Ride to Work scheme which allowed me to claim back the tax on the bike that I bought.

This is probably my first tip of the whole of this process: whoever you are, what ever you like doing, get your company to sign up to the Government’s Ride to Work scheme.

So I went along to Evans and spent all afternoon taking bikes out around Milton Keynes until I decided to buy myself the previous years’ Lemond Versailles. Part steel and part carbon it filled the gap between me and the road perfectly.

It has a mixture of Shimano 105 and Shimano Ultegra kit: 2 cogs at the front, because I don’t live in Wales. It has some nice Bontrager select wheels that I considered replacing a couple of years ago before I found out how expensive wheels are and just got them straightened instead and that’s about it really.

I did upgrade the front crank set to shimano ultegra when the fitted ones fell apart and I got the toughest tyres I could find after one particular summer of puncture after puncture, but apart from that, it has stayed with me through thick and thin.

It cost about £1400 when it was released but thanks to a sale and the Ride top Work scheme I only paid about £700.

I bought the most expensive bike I could afford, so that I would never have to do so again.

Hopefully I will never have to replace it.

I bought one in Halfords. I can’t imagine wanting to upgrade to one of those ones with a bit coming out the back… if my racing position ever gets so perfect that one of those will make a difference then I might consider it!

As I mentioned earlier, for my first tri I borrowed my brother-in-law’s Giant. I needed to buy my own shoes and as his pedals were SPD pedals I followed suit with suitable cleats and specialised mountain bike shoes.

So when I bought my Versailles, I got SPD pedals so that I wouldn’t have to buy new shoes. This also suited my use of the bike as sometimes I would do quite a bit of walking off of the bike.

But for the full triathlon I decided I would need as much help as I can get and although I have no complaints about my current shoes/cleats/pedals, having had a look around at alternatives I have decided to try out road shoes with SPD SL cleats which are supposed to help with power transfer between me and the road.

I think my other shoes would have been fine, but I have decided that as I have saved so much money elsewhere that I might splash out on these.

I went back to Evans but their best deal was not available in my size and I didn’t fancy white shoes! So I headed to ebay and luckily found that shoe (a Specialized BG comp road shoe)  in my size: only worn twice for just £32.10

I then tried to do the same trick with the pedals but they all looked a bit bashed up on Ebay and after some research I decided that the sale back at Evans could furnish me with a quite serviceable pair of brand new Shimano R550 SPD-SL Road Pedals for only £31.99 including cleats. So that is what I did. They arrived today.

The plan was that I have a pair of tri shorts and my London to Brighton t-shirt so they would be fine and I would change after the bike leg so I would have fresh clothes. But then my mate Rick, who is a designer, said he had a sample trisuit for a tri team for whom he had designed their kit. I tried it, it fitted, so I thought well why not!

Comment from the other side: having run the race now, I wish that it had a pocket or two, but it was fine just shoving gels up my legs and I’m not sure it really would have been worth the extra on the basis that my trisuit was free!

I asked for sports socks for Christmas!

My shoes will probably wear out before the race but I’m not worrying yet. When I do I will go back to Milton Keynes and hit Sweatshop… although my birthday is in May so that should be handy!

Kit belt for the run

On the Lisbon Marathon I thought I could just use the pockets on my t-shirt and shorts but it was all too clumsy, so I hit the sales at Sweatshop and got a nice flourescent yellow with one major pocket, two little ones and one that comes with a small bottle.

Stuff that will go in here includes gels, bars, mobile phone, credit card… after all you never know when you might need a beer!

Comment from the other side: I binned this idea and went back to a few gels stuck up my shorts.


Saddle Bag for the bike

For emergencies: 2 inner-tubes, puncture repair kit, multi tool, loose change (in euros), after all you never know when you might need a beer and they don’t accept UK credit cards!

Also on the bike I will have my Bicycle Pump and 2 water bottles – one with water, one with some sort of superman powder added.

I just have two questions remaining…

Tribars? Any thoughts? I don’t like the idea of training around the roads of southern England with my head down

Pizza? Is there a pizza shaped bag for the bike?