What a brilliant time we had on Sunday.

This year is about doing stuff so me and my mate Al decided to sign up for the London to Brighton bike ride.

To be honest I didn’t train a lot for it but what can possibly go wrong?

I got up and set off for St Albans to pick Al up at about 4:15. We had decided to leave early to miss the crush.

About 10 miles outside London on the M1 we passed a taxi with some cyclists in it so we decided to follow them. Within a mile of Clapham Common we turned off, dumped the car and got on our bikes and cycled to the starting point.

We picked up our route maps, joined the queue and were off within 15 minutes. So far the only unexpected event was seeing two guys wearing mankinis and to be honest we shouldn’t have been surprised.

Getting out of London was slow – we only averaged 9 miles an hour but it was a nice warm up.

Once we left London we sped up and the going was easy.

At about 30 miles we had a bacon butty and a chocolate bar and then we headed on to Brighton. I cycled up Ditchling but Al decided not to.

We arrived at Brighton at 10:30, celebrated with a selfie and a swim in the sea and headed off to find a decent pub. 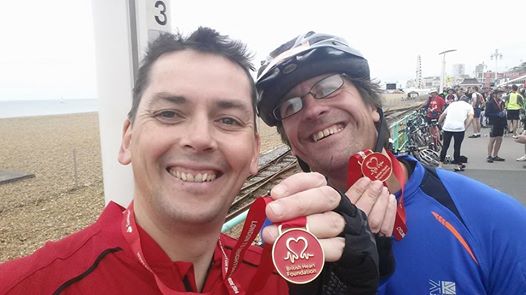 We had a drink and then went to another pub because we could, where we had lunch and another drink!

Then we wandered off to put our bikes onto the lorry and get on a coach back to London. We were the last ones on so when we got to London our bikes were the first ones off.

We picked up the car and drove home.

Apart from the guys in the mankinis and the lady laughing at my bare bum as I got changed on the beach, it was probably one of the least eventful days of my life… except that me and my mate Al did the London to Brighton Cycle Ride in 3.5 hours and raised money for charity!

One Reply to “London to Brighton Bike Ride”