My Full Triathlon – The Swim

So here I am in the boating lake at Gravelines surrounded by 200 rubber-clad men and women peering into the distance and trying to find a landmark to sight on in the far distance. The course is 1800m up, 1800m hundred back, plus 100m extra at either end, crossing the lake, so to be honest at water level you can’t make much out anyway.

The water is 23.1 degrees centigrade. 1c warmer and we would have had to have discarded our wetsuits!

I had found out that this was a possibility earlier the week, when Christophe at Ch’tri updated the website with the news that, thanks to the warm weather, the water temperature was already 23c and if it got to 24c wetsuits, in line with triathlon rules, would not be allowed.

I had abandoned all training without the wetsuit several weeks ago and besides, had never had more than a splash in open water without a wetsuit, ever! I hadn’t even considered the possibility that I may be swimming without it.

Fortunately my mate Rick, a graphic designer who has worked with cycling clubs and tri clubs, had given me a trisuit, that he had as a sample, to race in and I had dashed off to Box End to see the difference.

Of course I had not forgotten how to swim and in fact it showed me how bloody lazy my legs had become in the wetsuit. I wasn’t planning to kick too much with them as I suffer from cramp in the water if I kick too much, but my legs were going to have to do a little more work if they were to be still awake by the time I needed them to stagger out of the water and into T1.

Of course the reason why the water temperature had stabilised was that instead of the sun that we had initially been promised, rain was now the order of the day and, dependent on which weather forecast you looked at, either the morning was going to be sunny or the afternoon and evening, but not all three!

At 7am, though, the water was calm, the air temperature pleasant and my vaselined body fitted snugly in its rubber glove.

And now they are shooting at me… oh no that is the “off”.  It has begun. After 9 months of talking about it, and 6 months of training (with the odd week MIA), there is nothing left to do but swim, bike, run.

This is fun. OUCH!

These bouys are a pain and they go all the way along the lake, every 10 meters and OUCH I’ve already hit two of them…

I think it was between the second and third buoy that I realised that this was a good thing – these buoys were going to be my lane markers all the way up and all the way back – no need to sight, no chance of zig-zagging – this was going to be a cinch!

It may have been mentioned in the “Briefing de Course” but, as I didn’t understand a word of it, I don’t know.

Yes! Maybe I should have realised this 6 months ago but, in truth, it was only when I discovered about the possibility of not wearing wetsuits and I was discussing the issues with Clare, that I said

“It will be fine: they will tell us at the pre-race meeting whether we will need wetsuits”

“Do they do it in English as well then?” she asked and I flashed forward to me standing surrounded by 200 French triathletes as Christophe, the Race organiser, finishes his pre-race brief and asks if anyone has any questions: I nervously put up my hand and ask “encore en anglais si vous plait?”

So, the usefulness of the buoys came to me in a flash and I don’t think it can have been mentioned in the meeting as not many others seemed to be following them.

I had been considering, finding a swimmer, who was going at a similar speed to me, to draft on, but I couldn’t find one that could keep a straight line. One lady broadsided me, went off and then broadsided the guy in front of me. I don’t know how long she kept that up for but she must have swam well over the required 3800m by the time she crawled out of the lake that day.

So I just put my head down and went on my merry way! 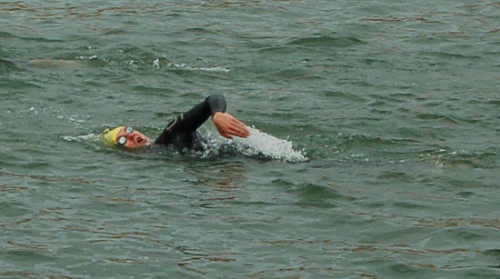 There is not much more to be said about the swim. If everything in life could go as perfectly in life as the swim did then I would be a happy bunny. I don’t mean it didn’t go without hitch, but nothing happened that I hadn’t planned for.

On the night before the race, I met a fellow competitor outside our hotel who, after a few painful sentences in French, realised that if he was going to get any sort of sense out of me he would have to speak in English. This was perfect for me because I was able to ask him about the race briefing. He explained that everything was simple and that there was nothing out of the ordinary, which set my mind at rest.

He also said that he had been talking to a group of competitors earlier and they all agreed that even experienced triathletes are never completely sure that they will complete a 226 and that I should take comfort in this. So many things can go wrong during the course of a day. You can plan all you like, but something will always be there to surprise you.

But in the lake that morning, nothing did.

That is not to say nothing happened, but what did happen I was able to deal with. My goggles got a bit tight towards the end and then my race cap came off, both requiring me to stop and tread water whilst I sorted it all out. As I mentioned earlier, kicking strongly can give me cramp, especially once I’ve been in the water for some time. But, after a chat with a guy at Inspire Luton swimming pool, I started to practice relaxing out of cramp rather than over extending the offending muscle and that helped me out now and I was able to get rid of the cramp and continue on may way, even making some time up on the swimmers that had left me behind whilst I trod water.

I staggered out of the water and toward T1 about 5 minutes ahead of schedule. I shambled past the wonderful Clare who was in the right place to cheer me on, as always!

I had completed the first challenge and everything was right with the world!

And then something happened that I hadn’t planned for: a guy handed me a cup as I came out of the water. Without thinking I took it and took a swig; TEA! black, no sugar.

But what made me care about this cup of tea more than any other cup of tea I have ever thought about before was, that 5 meters on, there was someone handing out sugar. Brilliant!  I was loving this race and I even had a few swigs just to celebrate the moment. It didn’t even worry me that in my pre-race planning I hadn’t learnt the French for “two lumps please”!

Maybe it was in the pre-race brief!