I suppose I should say something about the whole experience. The goals I set out to achieve, what I’ve learnt about myself etc etc. Maybe if I was a better writer, or if I was more self-aware, then maybe I could throw together a few paragraphs that would give you an insight into my soul… but honestly?

A full triathlon is something I have wanted to do for some time and my advancing age and need to do some proper work meant that it was now or never.

After discovering the fees that some of these organisations charge and the costs of many of the facets of the race, it also became important, to me, to do the race as simply as possible. Partly this meant cheaply but also gadget and faff free.

I was lucky that having done a triathlon 10 years ago and already having a road bike from when I used to commute by bike, I had most of the kit I needed and everything else I bought cheap or second hand or added to my birthday list.

I even joined England Triathlon because it was cheaper than paying the race license and getting the doctor to give me a medical. I know that is not quite the idea and my membership also gave me insurance cover and lots of other lovely other benefits and it might even persuade me to go and try a couple of sprint distances at the end of the summer: but if the doc is going to charge £60 for a sports medical and the license fee is 30€ what else can I do?

I shunned the showmanship and price tag of Ironman and found a whole world of joy in long distance racing, that just comes from enthusiastic organisers, racers and volunteers, miles of empty roads and a quiet voice inside that said “Come on Simon” from time to time, at a cost that most people can actually afford.

That cost, by the way, was not only in monetary terms but in time and the price others had to pay too. If you read the training chapters in my blog you will see how low-impact I tried to keep it and still stand a chance of completing the race! Even so, Daisy still asked why I had to keep going running in the evening. I told her that I would stop after the race, to which she replied, “but won’t that make you weak again, daddy?”

So that is that! Unless, Steve Redgrave-like, I change my mind and return again next year… but I think Clare might shoot me. Besides I have to do some work now: London’s Theatreland won’t run itself you know!

I don’t think I’ve learnt anything about myself apart from that sometimes I forget to leave my shoes upside down.

I already knew I can do most things I set my mind to and that my rather chaotic brand of enthusiasm will generally see me through. I’ve always been a “That Will Do” sort of chap, which is great if I am right, but I know that, if I am not careful, it can mean me not seeing something through.

But wave my hands in the air and get enough people watching (well just Clare really) and I will try not to let people down (especially Clare)!

So, here I am, Simon Harding: Triathlete! 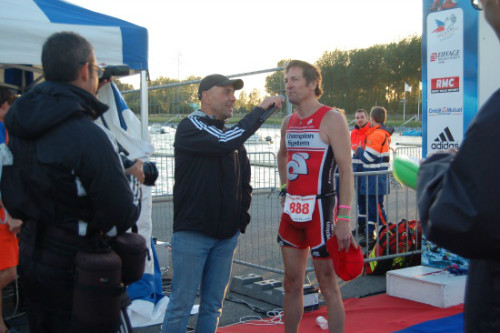