So my daughters got chickens.

Actually this is no hardship and, bless them they are a a joy to keep – the chickens, not the daughters!

We’ve had chickens before as a family and I had them when I was young, but these are actually daughter number two’s responsibility… at 6 years old! Yes I know who will really be getting up to let the out and feed them when the winter closes in but for the moment she is stepping up to the mark… especially as they have just started laying.

So what have I learnt and what would I suggest?

Job one get a chicken coop. There are hundreeds on ebay but they are mostly relatively small, despite how big they seem in the photos.

Last time round I made ours out of palettes and it was brilliant but the wife said that access wasn’t good and cleaning was awkward and, whilst she like rustic, some things are a little too rustic!

Get a big one but don’t let it dominate your garden – either is size or style. Get one with run attached and, unless you have a friendly lorry driver, get one delivered. Mine is 3 metres long and over a metre wide and 1.5 metres high inside

You can be lucky, like me, although there is nothing lucky about spending 4 months keeping an eye out on ebay until the perfect one came along!

Second hand, well looked after, within 5 miles, the kids can stand up inside the run and it has easy access to the coop section… AND it was only £82 – BARGAIN! 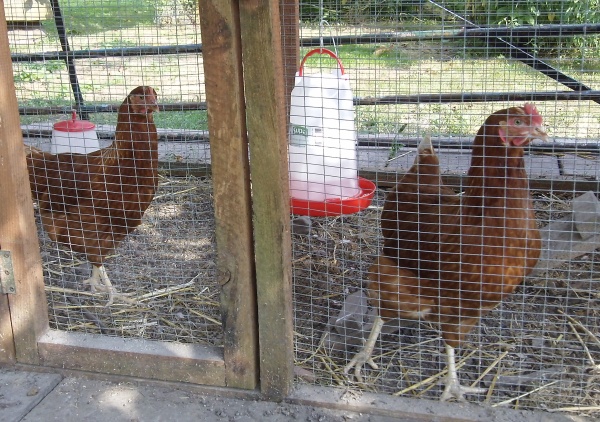 It is the first time we have kept the chickens in the run/coop complex. We let them out for fun when the kids are playing but most of their days are spent inside. So we have kept their numbers down to 2 so the area is generous.

Surround the coop with paving to stop the foxes getting under it. They are tenatious and if they can the will! They don’t look at a coop and admire the craft that has gone into building it… they just keep scratching until they get through!

We have gone for our favourite light Sussex / Rhode Island red cross. We had them last time round and they laid almost every day. They are also friendly and calm.

We bought them at point of lay. I was worried that my daughter would want cute chicks but she just wanted to get to the egg laying stage as quickly as possible. Chicks look lovely but go though a scraggly stage and you don’t know if you are going to end up with hens or cocks. 12 week old hens are perfect!

We once bought some white chickens which my daughter absolutely fell in love with as soon as she saw them. We sent the farmer in to grab the two she pointed out and then spent the next 5 minutes being entertained as he tried to pick 2 chickens out of a small but highly mobile flock of hens.

Great but we didn’t take the hint! What we should have realised was that this was what we would have to go through at the end of the day – trying to put them back into their coop.

Of course in the end we didn’t at all. First night they absolutely refused to get cornered or caught. In the end they hopped up a tall tree and we had to give up. Next morning the fox had ’em.

It wouldn’t have mattered on this occassion but do clip their wings – there are tonnes of videos online of how to do it. Easier than cutting my daughter’s toenails!

Buy in bulk. Big bags of layers mash and corn (although only use the corn for treats) and a big bale of straw: you are a farmer now! Hang your feeder and water trays from the ceiling of the coop otherwise the chickens will just stand and poo in them. They will keep their laying area quite clean but forget the rest!

Also get a bag of grit. This is used by the choocks to “chew” their food as hens teeth are as rare as…

Wood chippings is good for the run especially in winter. Spread a thin layer and rake it out each week. It stops it getting too smelly and too slippery… we may be farmers now but you have to think of the kids!

Anything else Chicken related?

They are just chickens – everyone in the family knows that vets don’t help chickens beyond a couple of drops if necessary. Chickens live, poo, lay eggs, get patted and die! Get over it!

Chickens do look sweet exploring the garden but the lawn mower becomes as useful a vacuum cleaner as it does a grass cutter!

If you are feeling good and kindly do consider getting ex battery hens… it is heart breaking to see them when they arrive but once they have been in your care for a few weeks and you see them change from scrawny individuals who cannot move to fluffy characters which rush around the garden chasing every single bug, there is nothing so heart warming.

There are companies that you can contact to help with this.

If you buy more than 4 chickens chances are that you will need friends and family to give excess eggs to: sometimes you can have too much of a good thing!